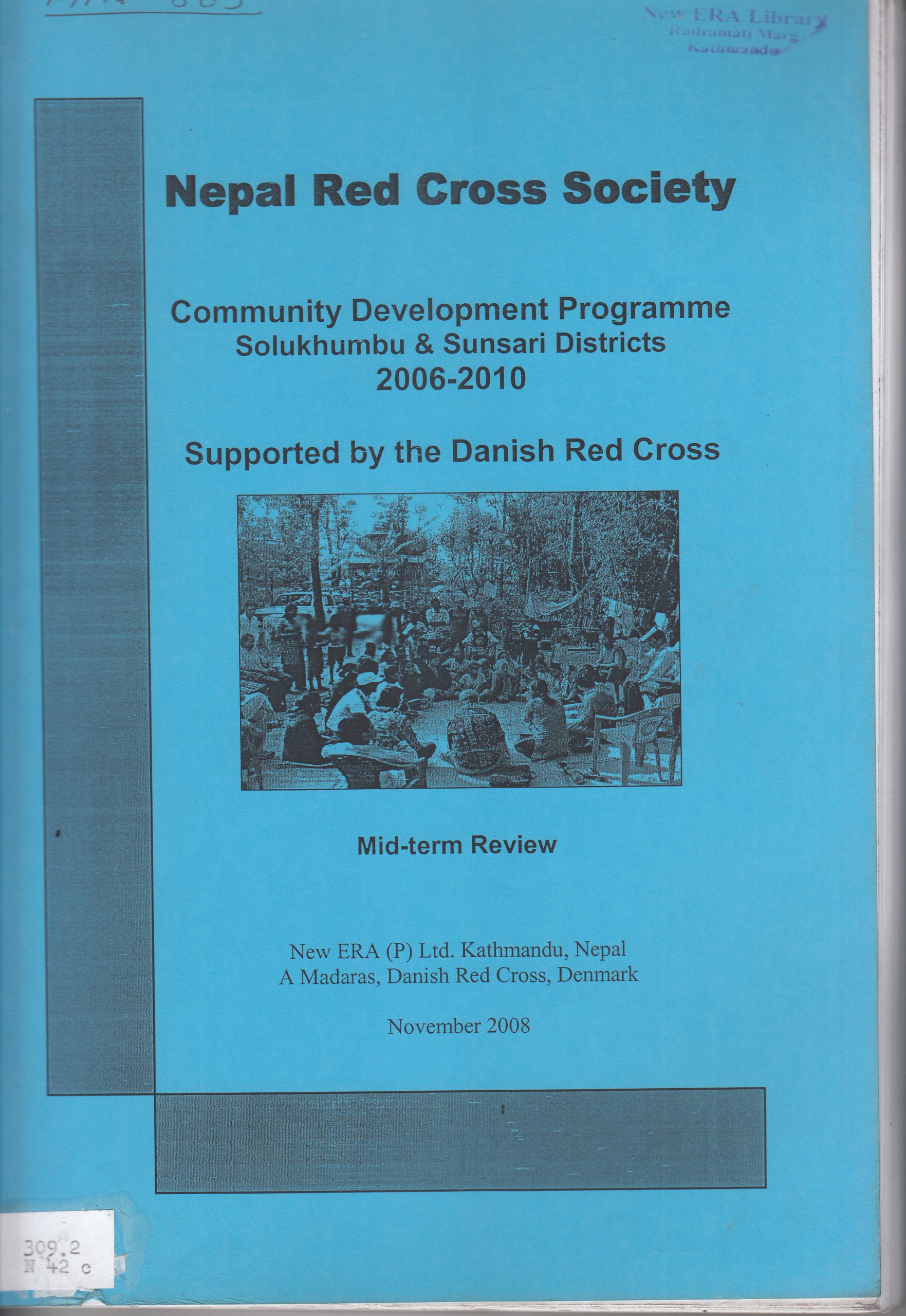 A multi-sector Community-based Development Program was implemented in two VDCs (Kangel and Nele) of Solukhumbu and one VDC (Bharaul) of Sunsari district since early 2006 with special focus on institutional setup, health promotion and human resource and infrastructure development. This study was conducted to assess the relevance, efficiency, effectiveness, impact and sustainability of the project. The study is expected to identify weaknesses in the program implementation process and recommend modifications in modus operandi of the programme for the remaining timeframe. 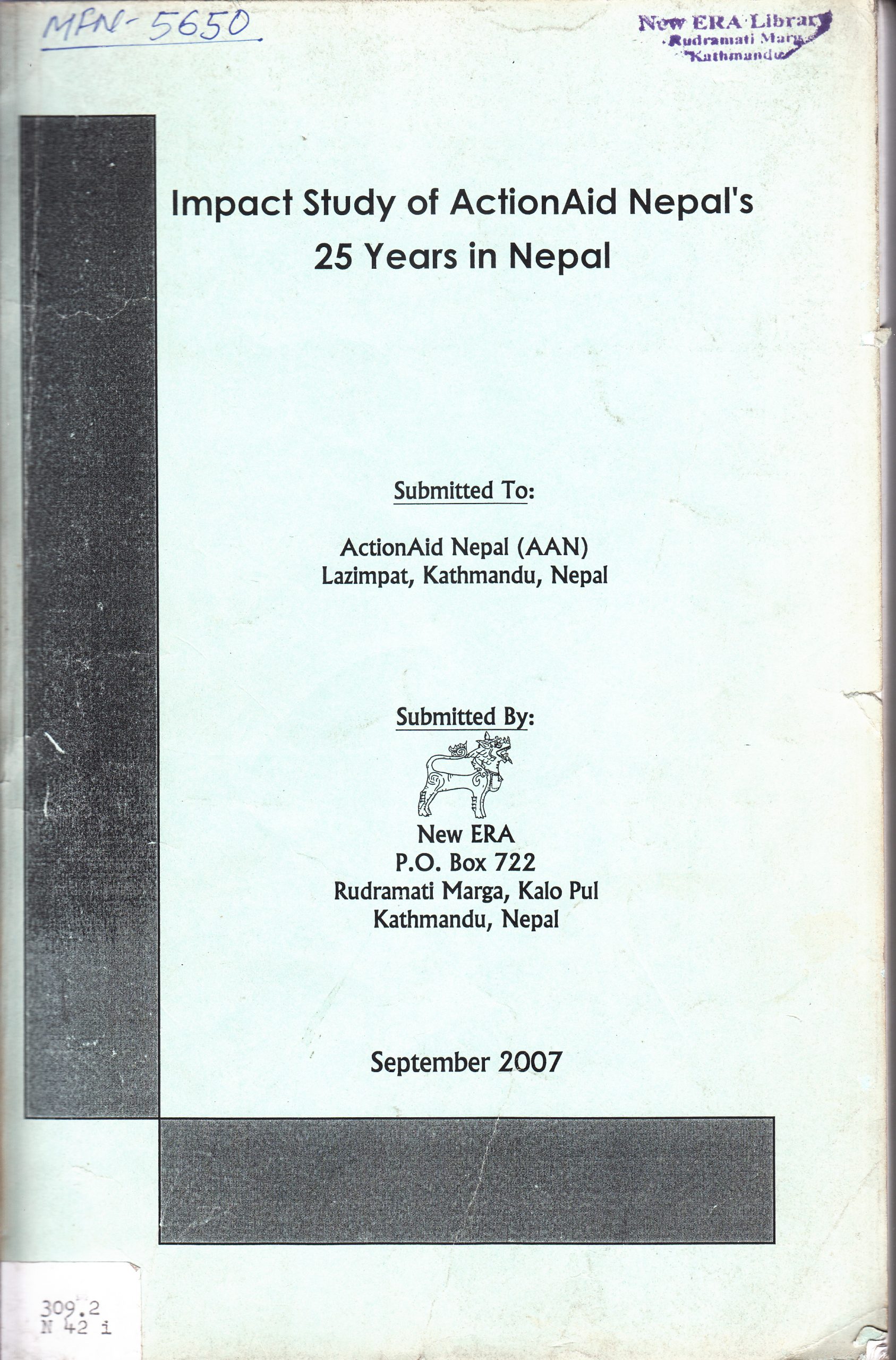 This study was undertaken to assess the impact of ActionAid Nepal’s (AAN) work by analyzing the changes brought about in the lives of the poor and excluded people, particularly its rights holders. The changes were assessed in terms of the rights holders’ ability to get organized to exercise their rights to live a dignified life, their capacity to take charge of their own development, their access to and control over productive resources and their influence and active participation in the decision-making process. Primary and secondary data were collected in eight sampled districts utilizing both qualitative and quantitative techniques. 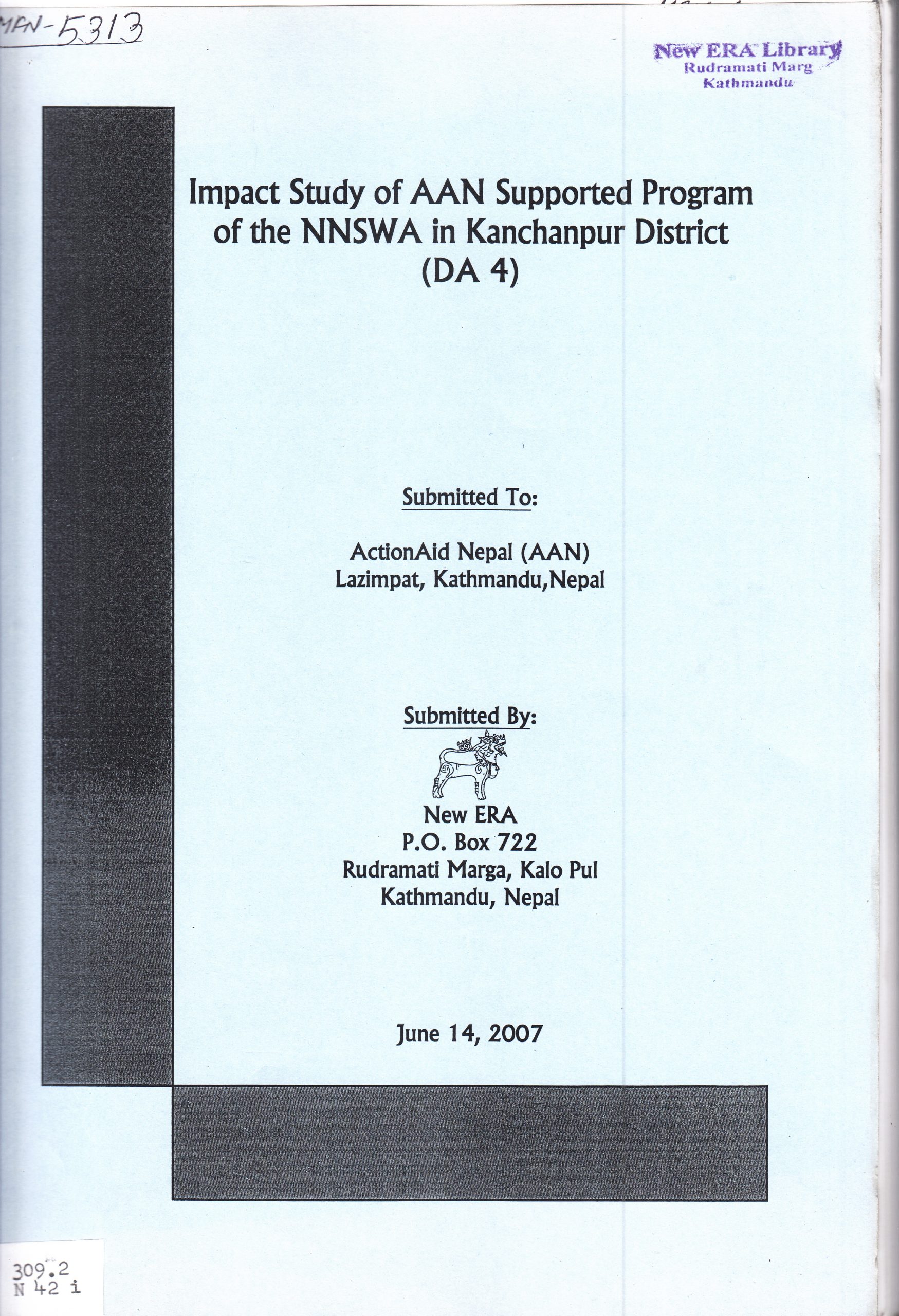 ActionAid Nepal in partnership with Nepal National Social Welfare Association (NNSWA), implemented an integrated Community Development Program in Kanchanpur district with aiming poverty eradication. This study was to assess the efficiency, effectiveness, relevance and impact of the AAN-supported initiative. The study assesses the impact of AAN’S work by analyzing the changes brought about in the lives of poor and excluded people; impact on other stakeholders’ practices, attitudes and behaviors in favour of   poor and excluded people; and attitude of community people and major stakeholders regarding the partnership between AAN and NNSWA. 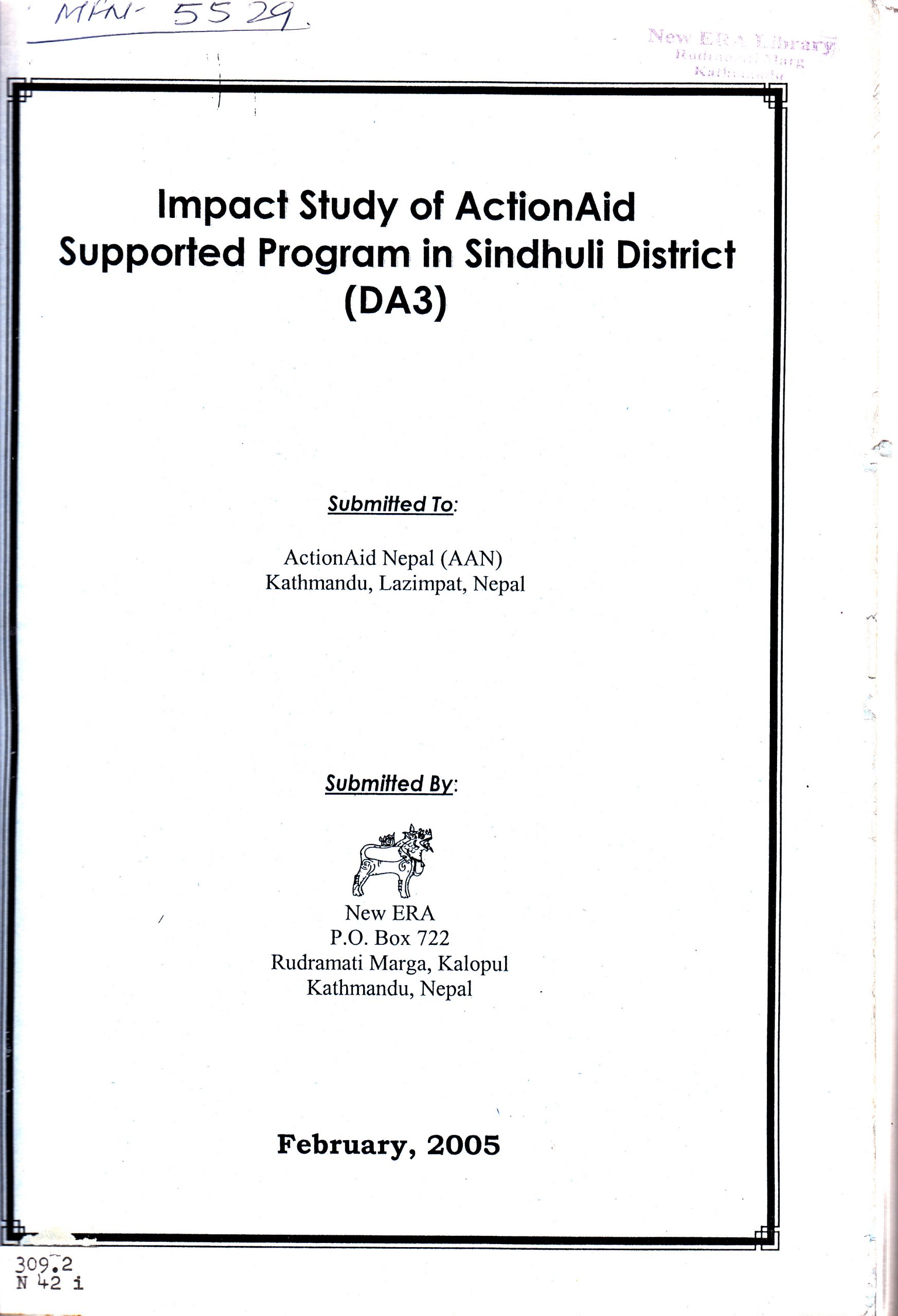 ActionAid Nepal implemented various development initiatives in Sindhuli district using different approaches of development such as direct implementation, partnership, integrated development, thematic, right based and service delivery. The sectoral development was focused on agriculture, livestock, education, health, poverty, food security, and infrastructure. This study examined the efficiency, effectiveness, relevance and impact of programs in sindhuli district. The study was conducted in a participatory manner with the active participation of communities and rights-holders of Action Aid Nepal. 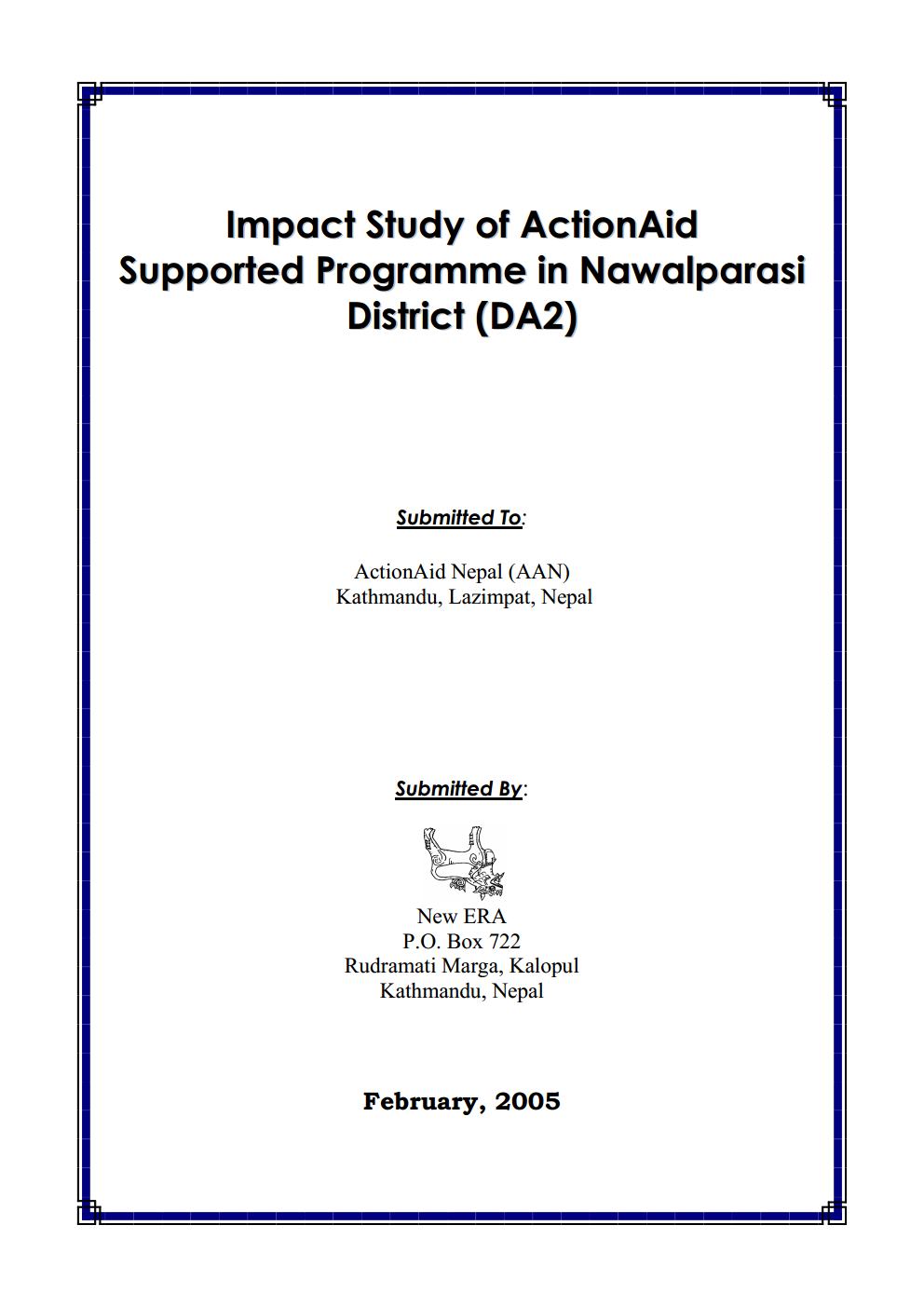 ActionAid Nepal implemented various development initiatives in Nawalparasi district using different approaches of development such as direct implementation, partnership, integrated development, thematic, right based and service delivery. The sectoral development was focused on agriculture, livestock, education, health, poverty, food security, and infrastructure. This study examined the efficiency, effectiveness, relevance and impact of programs supported by Acton Aid Nepal in Nawalparasi districts. The study was conducted in a participatory manner with the active participation of communities and rights-holders of Action Aid Nepal. 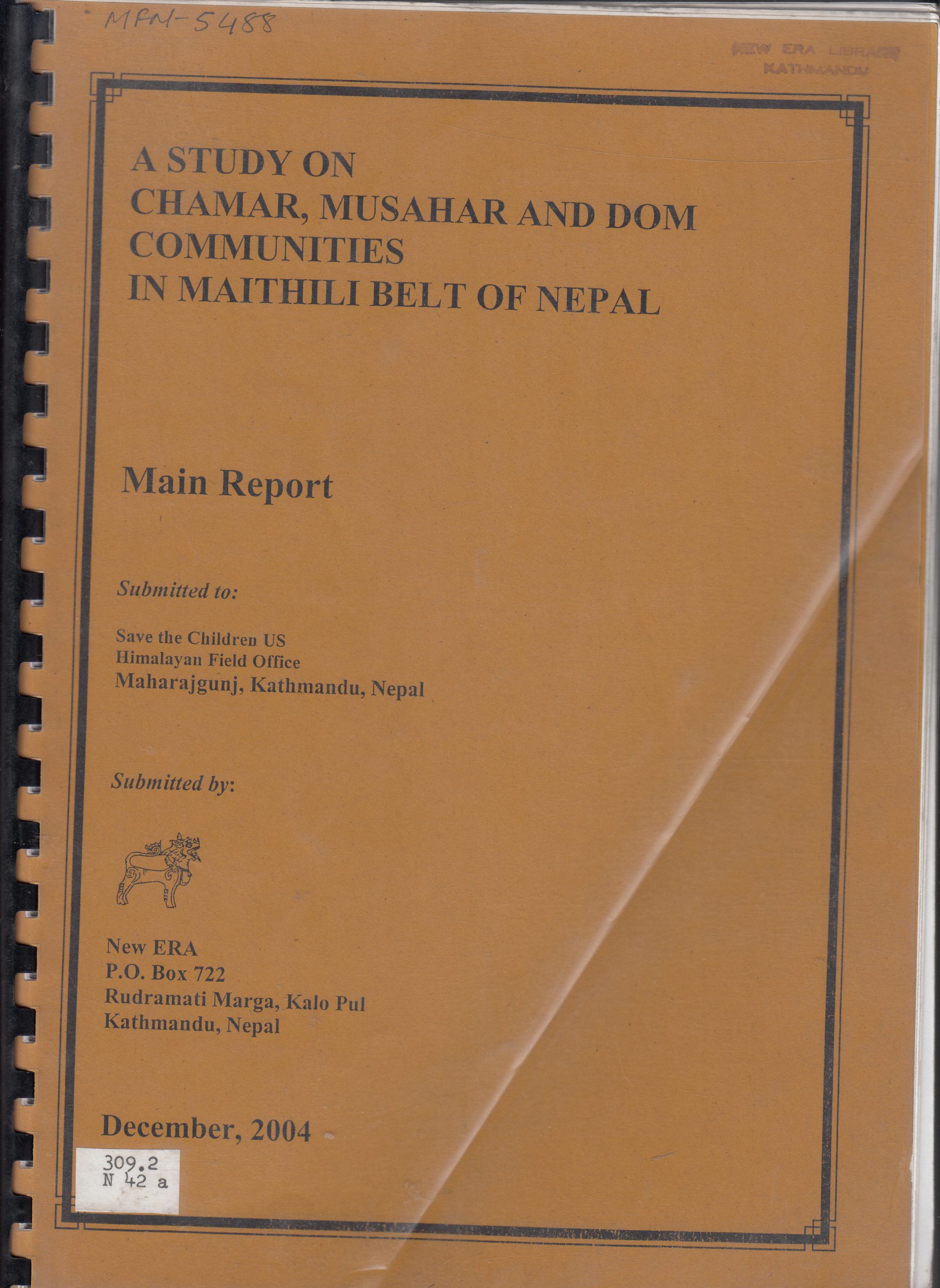 This study gathers basic information on the social, economic, health and political situation of the Musahar, Chamar and Dom communities in Siraha, Dhanusa and Mahottari districts, the Maithili belt of the eastern Terai region. The study assesses the status of these groups comparing the field, district and national level data. 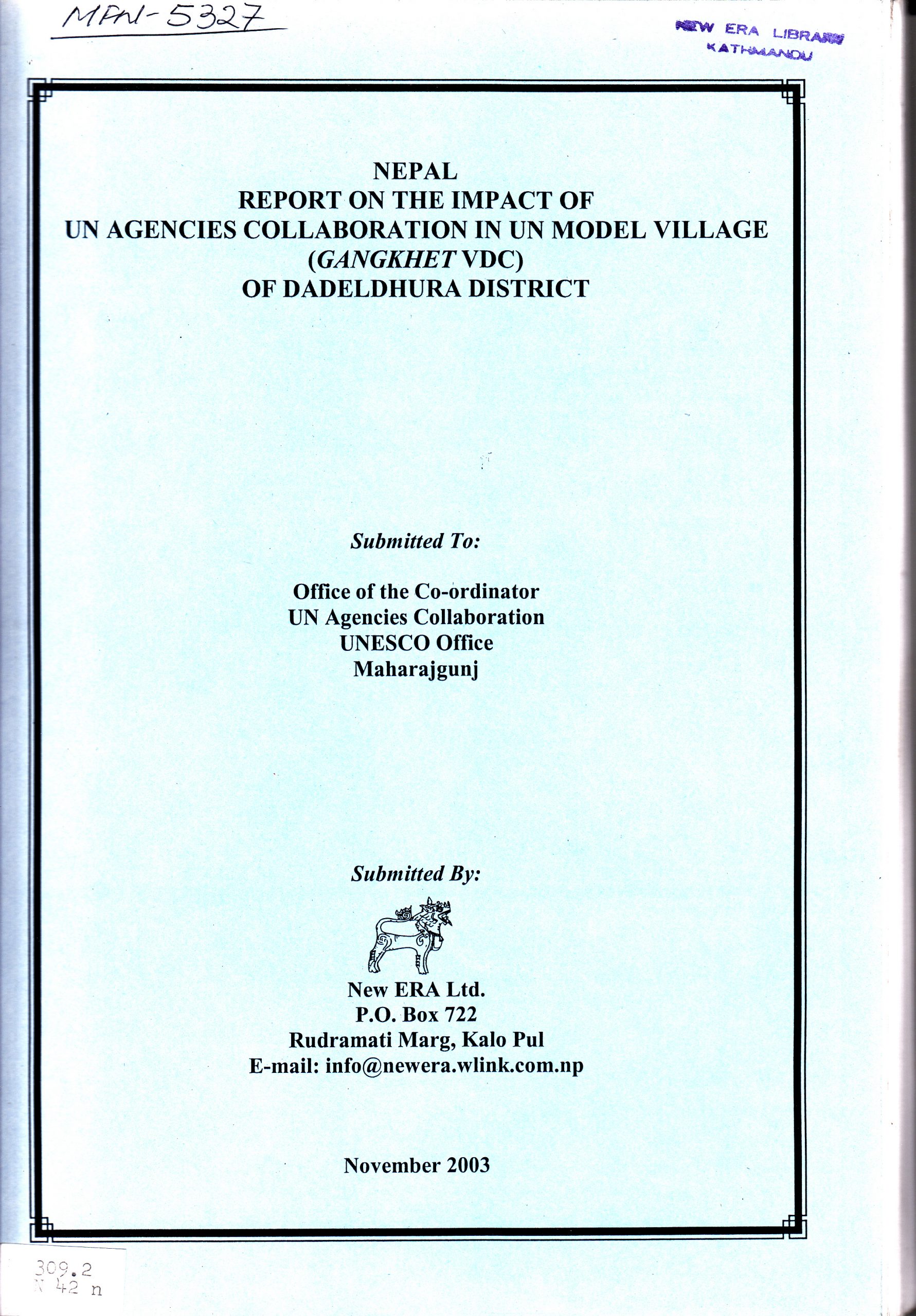 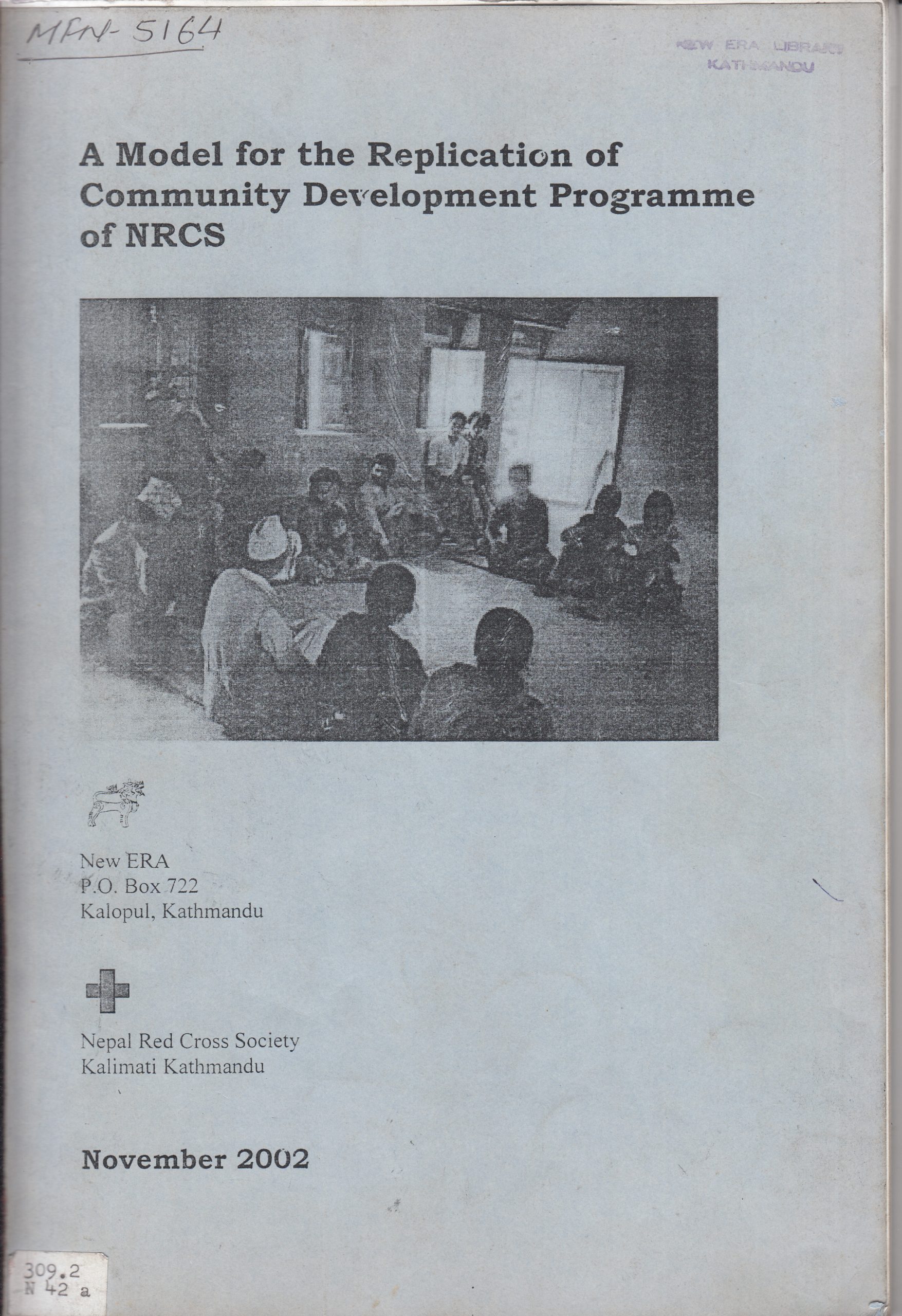 The Community Development Program (CDP) was initiated by the Nepal Red Cross Society (NRCS) as a pilot program to improve the health status of selected communities. The NRCS intended to replicate the program in other areas. This study contains a model for replication of the CDP based on the principles of local management and sustainability with facilitation of local units of the NRCS. The study assesses the sustainability of the CDP and identifies the widely acceptable, cost effective and needy activities from among the CDP activities implemented during the pilot phase. It also examines the existing resource base of local units of sub-chapter and district chapter in relation to their capacity to facilitate in the implementation of the model. 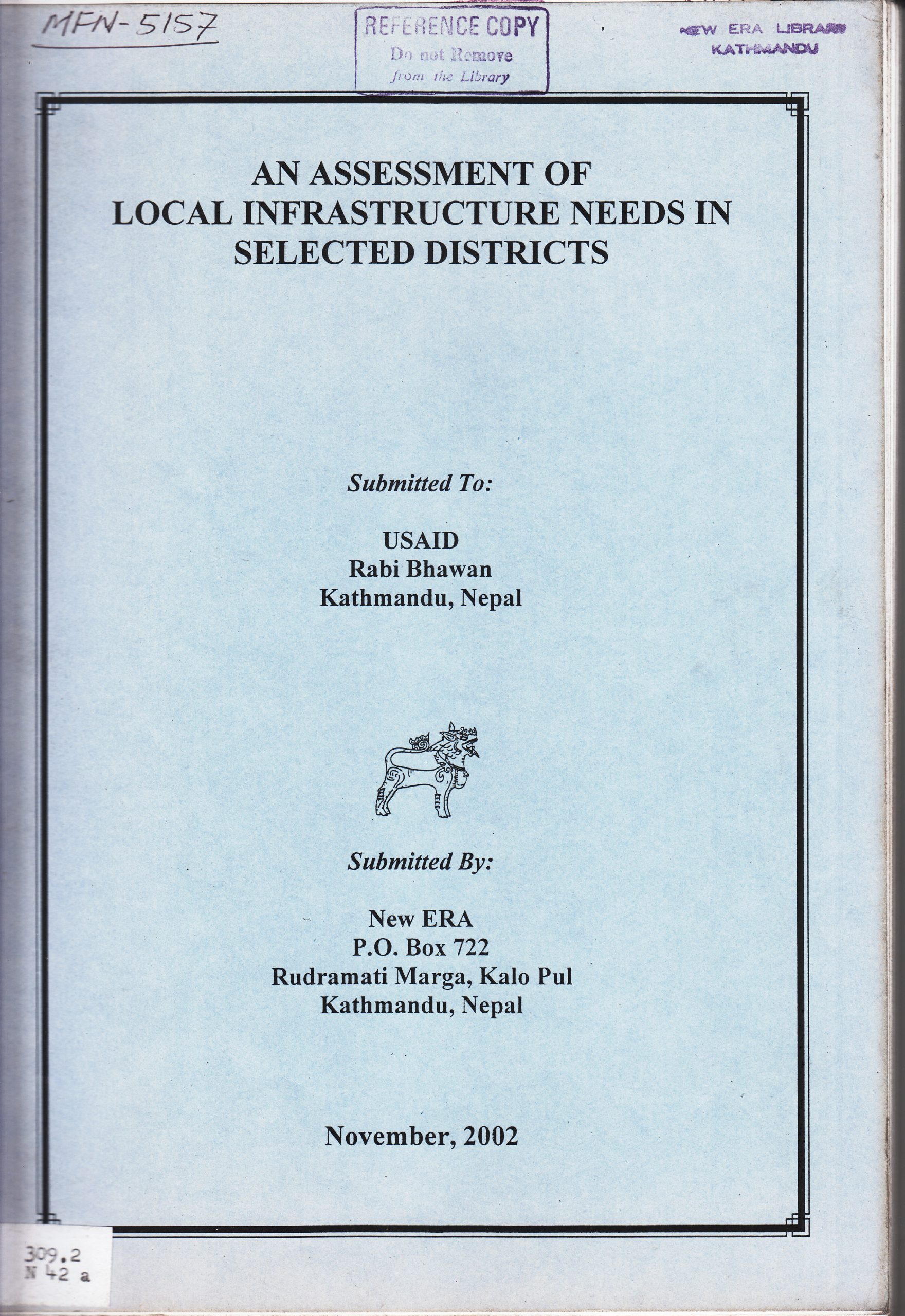 The main purpose of this study was to assess the local infrastructure needs and condition in ten selected districts of four development regions of Nepal. The study has been identified several potential program areas and clusters of infrastructure projects to implement those will generate short-term employment opportunity for the rural poor. The study has also assesses the availability of experienced and capable NGOs to assist in implementing the locally identified infrastructure projects and various types of community based organizations and their strengths in the identified area. 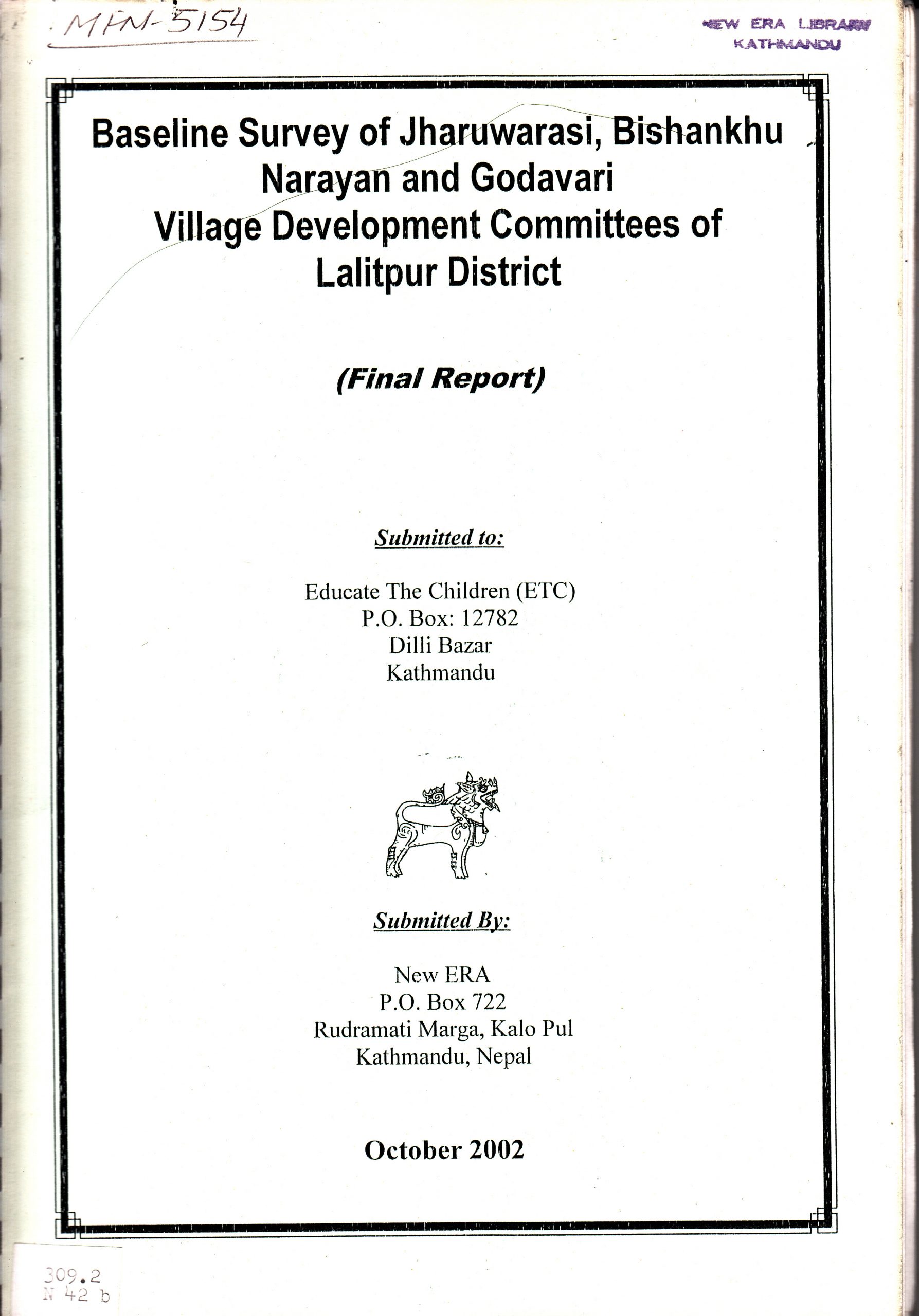 Educate the Children (ETC) has been working in Nepal since 1990 and their Integrated Community Development Program has been in place since 1994. It expanded its program to new areas in the VDCs of Godavari, Bishankhu Narayan and Jharuwarasi in Lalitpur District. The program’s target groups are socially deprived members of the community. This study contains baseline information on these three VDCs at the time of project implementation.